Im hurt – by Glory or Neptune?

After the article in Sweden Rock Magazine  #10 -2020 with Neptune, some eyebrows were raised after the comment about that Glory’s first single back in 1988 actually was an old Neptune song. A rather interesting story, but let’s go back in time a little before we explain what it’s all about.

We are now about six months after we recorded what later became the main part of the album ”Land of Northern”. A record deal had just gone down the drain and we had once again started to write new songs.

The line up in the band at the time was; Ray Alex – vocals, Row Alex – bass, guitar – Anders Olsson, guitar – Jonas Edler, drums – Jonas Wikström and on keyboard Tommy Mikk.

Inspired by more melodic metal, synths had now begun to get more room in the songs. Sometime 1987,  Ray had been asked to join Glory and didn’t have time to be as involved in rehearsal and songwriting as much as before.

One time when Ray came down to the rehearsal studio, we had just written the basis for the song ”Ready to fight”. When he heard what we wrote, he probably asked us to do some changes becouse he always had ideas to make it better. Ray tore out some old lyrics from an old binder and found the lyrics from an older Neptune song called ”The battle”. After some adjustments, it became the lyrics to ”Ready to fight”.  Soon after that, we went into the studio and recorded ”Hard to be right” and ”Ready to fight” which are both to be found on the album ”Land of Northern”.

We wrote two more songs before we called it a day. First out was the song “Keep us alive”, never released back then but can now be found on the EP “The last flight of The Rafven”. We actually palyed live ones aswell and it can be found on an old YouTube video from a gig from 1986. 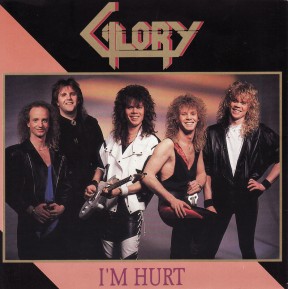 The last song written by Neptune in the ’80s was ”I’m Hurt”, yet another one that was written in our rehearsal studio. Ray was obviously involved in the writing process of ”Im Hurt” as well, at least in the latter stages as there is a demo version of the song recorded with his vocals. How the song actually ended up on Glorys first single release, we don’t really know. Assume they thought it was good. If you compare Neptune’s version with Glory’s, our original version is a bit slower and who knows, maybe we will release our very own version someday. All four songs have a  similar style and pattern and if you listen carefully, you might hear that by yourself.

The story behind the band name

The members of the band Warreins sat one day in the rehearsal room, probably sometime in 1980. They had just discussed their continuation and how they would go further, a few guys in the band had brought up the idea of ​​switching to a slightly harder sound and style of music.

When they started writing the new heavier and harder songs, the Old Norse mythology and the Nordic warriors – the Vikings were already great role models for the band and their lyrics but the name of the band wasn’t decided yet. Not long after, Row Alex found what he thought was some kind of jewelry, but which later turned out to be a trident that our Swedish coastal hunters have on their berets. This caused the band to spin loose in their thoughts.

They got a vision, that an Old Norse warrior had taken the jewelry from one of the voyages from the Mediterranean in the belief that it was the Vikings’ powerful symbol Algiz and in a mead drunk he dropped it in Lake Mälaren outside the large trading town Birka, which was not far from where Row found this piece of jewelry a few weeks earlier. The name Njord, which is the lake god of the Vikings, came up, but they decided that the name Neptune suited better as a band name.

Algiz Meaning: This rune represents the animal kingdom and is called the moose rune. It also represents our companions (spiritual companions and ”guardian angels”) and power animals. Algiz is an important rune to have access to, to build up your inner strength. One of the most important aspects of Algiz is protection against evil forces, and perhaps the most powerful protection rune is the binding rune, composed of four moose runes in a cross, with the ”horns” outwards, called ”horror helmet”, and as the name suggests is a kind symbolic helmet, or protection, against terrifying phenomena. Conversely, this rune can show a lack of contact with survival instincts, a lack of communication with our protective spirits and our true nature, and thus a lack of protection against dangers, internal as well as external.

About the tempo and the pitch

For those who read our interview in Sweden Rock Magazine about Glory’s first single actually was a Neptune song. More about that anecdote can be read above but there are more funny stories from the interview that we are happy to dig deeper into.

After we played at The Abyss in Gothenburg, there was a person in the audience who after the gig pointed out that we played some of the songs live… a little slower than on the record. It was not anything we had thought of, the songs were more or less in the backbone even though it was many years since we played them.
The album ”Land of Northern” is just a collection of old demo recordings, some recorded in a studio, and a few others in the rehearsal room, often with simpler recording equipment.

Some of the songs that were recorded in the rehearsal room, thinking about ”Burglary man” and ”Enemies” which are songs that have a different tempo, but that’s not all, they also have a different pitch. Why… one might ask. Well in an attempt to make it sound really tight, you chose to slow down when you recorded to later increase it on the tape recorder again, but I think it was raised a little too much… as I said the pitch is almost a full step above normal. This means that these two songs have a slightly more high pitch vocal than the other songs.